Alia Chughtai (standing at the back), a journalist with filmmaker Akhlaque Mahesar (right, behind the table), and others in their team at Aur Chaawal (And Rice). Chughtai believes in using local fresh ingredients that are healthy and planet-friendly. Her method of cooking fits in with the Barilla Center for Food and Nutrition’s Double Pyramid. Credit: Zofeen T. Ebrahim/IPS

KARACHI, Nov 19 2021 (IPS) – Balance is the absolute key, says Alia Chughtai, a journalist who started a catering service with filmmaker Akhlaque Mahesar, by the name of Aur Chaawal (And Rice), two years ago. She knows what she is talking about. Suffering from gastrointestinal issues, Chughtai’s journey towards healthy eating started a decade ago. Once she understood the science behind nutrition and what balance of eating meant, she understood what her body had gone through. And thus began her quest for cleansing it.

“I couldn’t have garlic or onions for eight straight weeks,” the two most essential ingredients one cannot imagine cooking desi (slang for Pakistani) food without, she told IPS.Two years ago, Chughtai decided to turn her food journey into a small side business. “I got into this because there was a personal need for clean desi food without the bad oil, chemical-laced spices and food colouring,” she said. Today her fight is against processed food which she believes is the reason behind the multitude of ailments in people, and she swears by “heartily grown vegetables and fruits”. “But it’s not a solo ride,” she said. For a well-oiled business to run successfully and expand, the pair have divided their tasks. While Chughtai oversees the day-to-day operations and “menu ideation”, Mahesar looks after the background logistics. 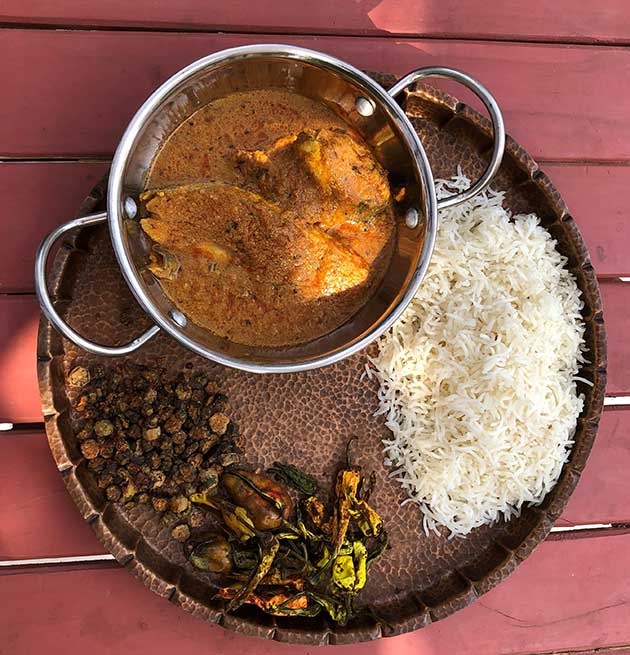 Surmai (fish) korma and rice with crispy okra and fried chillies on the side. One of the balanced dishes found at Aur Chaawal. Credit: Zofeen T. Ebrahim/IPS

While navigating the ‘farm to fork’ path, trying to find the balance between sustainability, nutrition, and access, Mahesar said they try their best “to use locally grown, locally made products”. In turn, the duo has become acutely aware of fairer returns for small businesses and farmers.

“Ours is a small business, and we are all for supporting other small businesses,” said Chughtai’s partner. The pandemic also acted as a catalyst for many Pakistanis to think and produce locally.“We try to source as much as possible from around Pakistan, including the different types of cheeses and even the pasta,” he said. But looking for quality produce requires quite a bit of research, which they both enjoy doing.

“We get a month’s supply of spices from small towns in Sindh; a certain species of chillies from Muzaffarabad, in the Punjab province; saffron and buckwheat from Hunza, in Gilgit-Baltistan region and saag (mustard plant) from Lahore, also in Punjab. They substitute ghee (a type of clear butter) for oil to cook in, which they get from Matiari, also in Sindh, weekly.

Fayza Khan, president of the Pakistan Nutrition and Dietetic Society (PNDS), strongly feels those in the food business must preach and practice healthy and sustainable eating, advocate for science-based diets, recommend reduced intake of meat and highly processed foods and demand from the government better labelling on packaged food.

To “reduce the burden of malnutrition and non-communicable diseases”, those in the food business should “play their part” in promoting healthier ways of cooking food and minimizing food waste. Frowning upon overconsumption of fat-laden food, including bakery products, fast food, and sweetened beverages, she said: “Nutrition and lifestyle-related chronic diseases in Pakistan among adults as well as in children including the prevalence of obesity and an onset of diabetes in young age is spreading fast.” Khan, therefore, recommends “traditional foods” which are healthier if “home-cooked with better cooking techniques”. 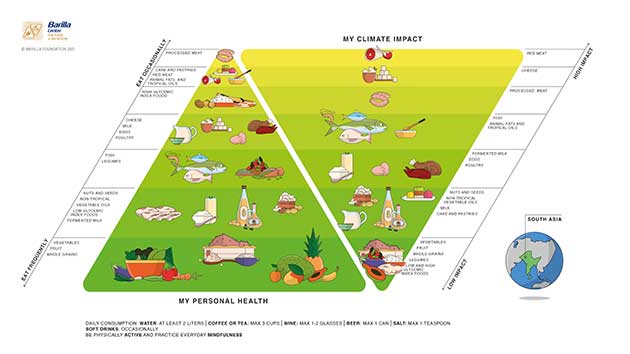 Finding the balance between food systems and the planet. Credit: BCFN

And that is what the Barilla Center for Food and Nutrition (BCFN) advocates: that healthy diets, especially traditional foods, play a significant role in food sustainability as they have a low environmental impact.For example, the Mediterranean diet of fresh fruit, vegetables, fish rather than red meat, and cereal-based products, such as pasta, and cooked in olive oil, help prevent heart disease. Little wonder Italians are ranked healthiest in the world. Italy has the highest number of centenarians in Europe.

As Chughtai and Mahesar fine-tuned their business model, they have increasingly understood the integrity of sustainable food strategies and started employing caution to minimize any environmental or climate impact it may be causing.“As an entrepreneur in the food business, it is our responsibility to reduce greenhouse emissions, of animal welfare and protection of small farmers and workers in the food business,” said Chughtai.“We initially used bagasse bowls and containers,” she explained but had to opt for cheaper recycled packaging boxes because bagasse was too expensive.“We use regular reusable plastic boxes which we refill with food for 10% discount on the food,” she said, adding: “People don’t want to pay higher costs for desi cuisine!”

They also compost their wet kitchen waste and use it as manure for their vegetable roof garden, where they grow their red bell peppers, chillies, broccoli, tomatoes, eggplant, gourd, and some herbs.But Chughtai, says Aur Chaawal, is not just a business; it is a quest for “clean food”.It took her several years to find out that the root cause of her stomach issues, said Chughtai and said everything pointed toward the pre-packaged spices with their overdose of flavourings and colours. Averse to them, at Aur Chaawal, they use the old-fashioned pestle and mortar to pound fresh garlic, smash the ginger or chillies or grind the whole spices into powder.“Our cooking may be labour intensive, alright,” she admitted, but insisted it was “clean and healthy”.

Chughtai may not be aware of it, but Aur Chaawal has uses Barilla Foundation’s Double Pyramid model of placing the health and climate pyramids side-by-side, encouraging healthy eating for humans and remaining respectful of the planet.In a city like Karachi, which has a deluge of caterers, food joints and restaurants and a huge population of discerning gourmands, securing 10,000 followers on Instagram, and a steady daily clientele of between 35-45, in just two years, is no mean feat.

“We have to be innovative,” said Mahesar, but puts their success down to the awareness among their regular customers (that include many working women who want her to cook for their family), that the Aur Chaawal menu will be nothing but wholesome.The business also caters to those who are counting their calories. But Chughtai insisted a one-size-fits-all formula does not work for here.On average, she said, every body’s plate should be 1/4th filled with protein, 1/2 with greens and 1/4th with complex carbs”.But she emphasized: “Everyone is different; you have to eat according to your health needs.”

For instance, on her plate, the portion of protein would be 1/3rd protein since she was low on iron. And this, she said, was the mistake many nutritionists in Pakistan make. “You cannot apply the 1400/1500 calorie rule to everyone!” said Chughtai, who was fortunate to train under Adrian Leunga, a certified nutrition coach and personal trainer and who helped “reconfigure my brain about good food and bad food”.

One day, when her inner writer gets restless, she plans to document her “journey”. She intends to travel from the coastal villages to the mountain peaks and include recipes she picks up “of the unconventional eats and the ones we’ve adapted because Karachi is such a smorgasbord of ethnicities” in a “beautifully designed” compilation. Till then, having brought up eating home-cooked food made by her mother, she said, Aur Chaawal will continue serving “clean” meals using the healthiest, organically grown produce and spices for their customers.