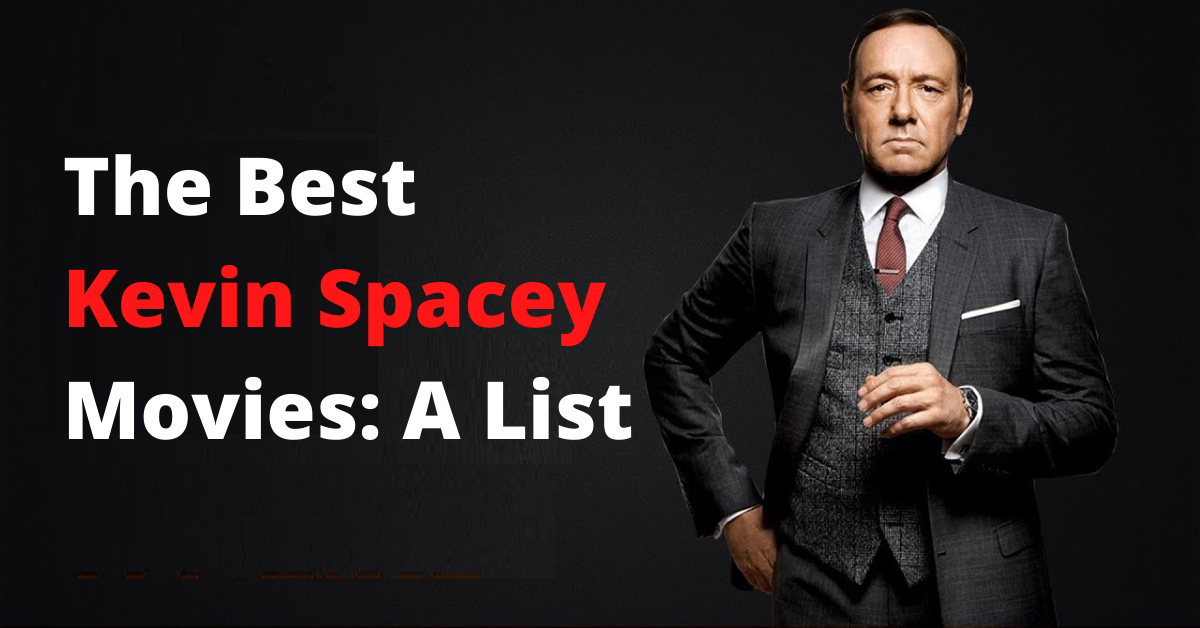 Regardless of what happened with Kevin Spacey, what with all those accusations and him coming out of the closet, you have to admit, that his life choices and acts from the past aside, he is a damn good actor. And a place like Hollywood certainly cashed him out. Acting in more than 65 movies and receiving a Knighthood from the British monarch,

Spacey has certainly proved to the world his acting mettle, and his repertoire in managing both film, TV and theatre and delivering classics after classics. If you’re one of the people who choose to overlook what he did and stay in the past, good. Because here is a list of the best Kevin Spacey movies of all time, up until the revelations came out.

Kevin Spacey’s movies list includes some of his older hits, some projects he did for the theatre and many movies where he was the supporting or secondary character, and yet still stole the show. Bearing in mind that this is a Kevin Spacey films list, you won’t be hearing about House of Cards, or any other TV shows he did.

Just straight Kevin Spacey best movies, that feature his acting and his incredible range of emotions that he can carry within the span of a single movie. So, here is a list of the best Kevin Spacey movies that you can watch today on Netflix, Amazon Prime or other streaming services.

Kevin Spacey as an actor always knocks it out of the ballpark, with his critically acclaimed performances in movies, TV shows and theatres alike. Many people also consider him to be a multi-talented actor, considering he is among a few actors who have a successful career in both TV shows and films, for an industry that prefers to keep these two segments as segregated as they can. So, with that in mind, here is a list of the best Kevin Spacey movies.

One of Spacey’s most noted and visible roles, L.A. Confidential saw Spacey alongside Russell Crowe and Guy Pearce, three detectives with different personalities and job ethics as they converge onto a single point to solve the crime rampant in Hollywood, L.A. Spacey plays Vincennes,

The sleazy detective always looking for a story and a quick buck to make off of it. Despite his character not being as wholesome, the way Spacey portrayed him made it a standout role, and garnered many nominations for him. One of the most highly regarded movies and acting performances of all time.

For many, it may hit too close to home with this role of Spacey’s, but American Beauty is one of his most defining roles, as a performance artist, and as an actor who can improvise almost anything when the script and the role demands it.

Because the story sees him as a man with a midlife crisis who feels attracted to a much younger girl (a classmate of his daughter), the movie can be a bit awkward now, but Spacey knocks the role out of the ballpark with his sublime acting and his acting intuition as he expertly portrays a confused man who struggles with his wishes and the desire to lead a normal, happy life, at least in front of the outsiders

The Usual Suspects (Released in 1995)

A masterstroke of a story, and even better with Spacey is in it, The Usual Suspects sees Verbal and five other career criminals bought in for questioning for a crime they all did not commit: the hijacking of a truck not too far from where they operate. This discriminatory behavior of the police against them is grounds enough for all five of them to start planning their revenge on the police, but before they can go about their plan of screwing with the cops.

They face the wrath of criminal mastermind Keyser Soze in the form of them getting trapped in the police station, and 27 members of the police force and criminals having been blown up aboard a boat. A thrilling masterpiece, The Usual Suspects is definitely one of the best Kevin Spacey movies and will go down in history as such.

Florida, the slowest vote-counting state in all of America, with the prime examples being the 2000 election, followed two decades later by the 2020 one. Spacey shines in a movie which depicts the frantic tension during the recount of votes in Florida, which allowed presidential nominee Al Gore to keep on his fight against Republican and eventual-president George W. Bush.

What we saw on the media was what we saw on the media, but Recount expertly depicts the behind-the-scenes activities that went on during that crucial recount. It is the perfect amalgamation of a sound story meeting an actor with impeccable performance. Recount may look like a movie best left for the political scientists, but it is a movie that displays the incredible performance range Spacey is capable of delivering.

Counting cards, getting rich and evading the casino authorities is what the movie 21 can be boiled down to. It tells the story of Professor Micky Rosa and his crackpot team of mathematical prodigies as they take the Las Vegas casinos for a ride with their card counting skills and math genius. Rosa, played by Spacey, also has a history with the casino security officer and enforcer Cole, and the entire story goes from a fun card game to a devolution of the human mindset; that despite whatever is your background and whatever your aspirations may be, money can corrupt any person, and Ben, the lead character, perfectly epitomises it with his downward spiral, at first, from trying to earn money to finance his education at Harvard, and at the end, just in it for the money. One of the most memorable roles for Spacey, and arguably one of the best Kevin Spacey movies.

Before House of Cards, the show that made Spacey a worldwide household name, Casino Jack was what we had to make do with if we wanted to watch Spacey swoon senators and lawmakers with money and whatnot to make them do his bidding. But that’s not to say that it is any less exciting or engaging as the former.

In fact, Spacey brings the same charm and confidence he does to the rest of his political thrillers as he did in Casino Jack, and you can feel the energy he exudes with his character. Its unfortunate that this movie never caught on with the critics and audiences, and is only considered a meagre success.

One of the few movies of Spacey that was absolutely panned upon release, The Life of David Gale carries a message that appeals to many, but the execution of the movie and the storyline only served to frustrate critics and audiences that the director and the story isn’t even trying at some point

. And that point is actually the whole movie, because while Spacey does his best to portray the plight of a man falsely accused of rape and murder, he alone can only do so much for the sinking ship that is the movie. The end is even more convoluted as we see Gale’s widow finally understand her wrongdoings for separating their child from him, but that doesn’t make up for the lacklustre attempt at what is essentially an activist movie.

A disturbing movie, to say the least. And as the best Kevin Spacey movies go, this is certainly up there as one of the good ones, despite the fact that Spacey plays a secondary antagonist in the movie, as the serial killer who uses the theme of the seven deadly sins to represent his victims.

And as you can imagine, all of the seven sins are displayed with the most gruesome effects one could possibly think of adding in the movie. Spacey is pursued by two detectives, played by Brad Pitt and Morgan Freeman, and the trio and their respective performances make this movie one of the best movies in which Spacey has performed.

Despite Beyond the Sea bombing at the box office, critics have always praised Spacey’s performance in the movie, where he plays the singer Bobby Darin. Essentially a biopic, it tells of the life and passing of Darin, albeit in an unconventional method, with the fantasy element playing out more in what was supposed to be a true-to-life biopic.

Still, Spacey manages to eke out some semblance from the character along the lines of a likable artist who was once counted among the ranks of the likes of Frank Sinatra. His love interest and later his wife is played by Kate Bosworth, who is historically the actress Sandra Dee. The movie, while not as much popular as others from the Spacey catalogue, still has the flair that he brings to the big screen.

As the name might suggest, The Negotiator, starring Samuel L. Jackson and Kevin Spacey, is about two top-end negotiators who find themselves in a precarious situation. Lt Danny Roman (played by Jackson) finds himself being implicated for murder of his colleague and for graft procedures involving the disability fund of the police department. Confused and enraged, he takes a bunch of officers hostage and demands for Chris (Spacey), the other high-end negotiator.

What follows is a game between the two, as Chris is convinced early on that Roman is innocent and has been framed. A search ensues for incriminating evidence linking either Roman to the corruption and the killing or the other informant of the department, and at the end, just in the nick of the time, the evidence is found from the home of the officer in the hostage situation, proving Roman’s innocence. A good Spacey movie.

Arguably one of Spacey’s best roles, Margin Call is a movie that panders to the 1 percent, but with a stellar cast, has managed to save its face in front of the bulk of the movie-goers, who happened to be the people from the ‘Occupy Wall Street’ movement. Starring Zachary Quinto, Simon Baker, Demi Moore, and Stanley Tucci, Margin Call retells the story of the 2008 financial crisis and how it unfolded through the lens of a fictitious investment company that realizes and anticipates the crisis early on and tries to minimize the damage.

Despite the plot not going quite in the favour of the populists, the film was still a hit, and the ensemble cast and their performances were especially praised in the movie. Bankers, investment guys, and the whole shebang is something that is not quite liked by the people, but boy do they make for some good Hollywood fodder.

You’d think that Spacey isn’t made for comedy roles, but like Jason Statham in Spy, it is actually quite refreshing for long-time actors in a specific genre to switch over to comedy, as not only is it a break for them and their jaws, but also gives their careers a sort of rejuvenation.

Horrible Bosses is the instance for Spacey, as he plays a psychopathic boss alongside an ensemble cast including Jason Sudeikis, Jason Bateman, Colin Farrell and Jennifer Aniston. The comedy element is not lost at Spacey, who performs brilliantly as the boss who is all-controlling and is a downright psychopath, seeking to destroy others just for his benefit. Definitely one of the best Kevin Spacey movies.

Called unfunny and unoriginal by many, many still think that Spacey enjoyed this role, and that this wasn’t just a cash grab at the part of the studio and Spacey. But while the premise may be unoriginal and unfunny,

The movie is still worth a watch, and with Spacey trapped in a feline’s body, the premise, at least for the much younger viewers, was still funny. So, with this, we end our list of best Kevin Spacey movies.