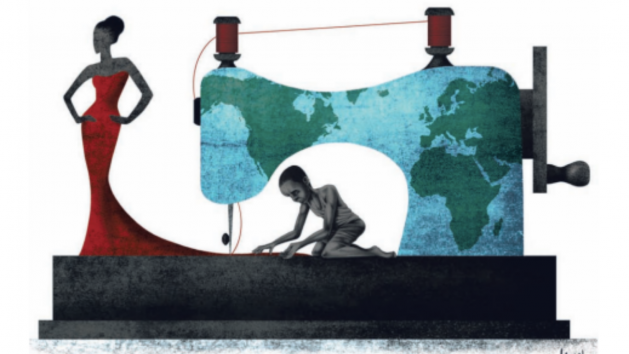 A picture exhibited at the 5th Global Conference on the Elimination of Child Labour is taken from the book ‘Through their eyes – Visions of forced labour’. This picture was created by Gargalo Vasco Portugal who won an award for his depiction of child labour. Credit: ILO and RHSF, 2021.

DURBAN, May 18 2022 (IPS) – Technology used to trace the origin and price of consumer goods to ensure farmers earn fair profits could easily be adapted as a tool to fight child labour Fair Trade living wage and income lead Isa Miralles told delegates at the 5th Global Conference on the Elimination of Child Labour.

Miralles told a panel discussion that brought together civil society organisations to highlight their crucial role in reaching SDG 8.7 to eliminate child labour and that the organisation’s technological tool could help to raise transparency and accountability regarding child labour practices. The six-day conference takes place in Durban, South Africa, until Friday, 20 May.

The conference aimed at putting the world back on track to meet the 2025 deadline for ending child labour was opened on Sunday by South African President Cyril Ramaphosa. Two Nobel laureates appealed for resources to end the scourge.

Nobel Laureate Kailash Satyarthi said he “refused to believe that the world is so poor that we cannot protect the children”. During the week high-level delegations have been looking at research, finance and innovation to ensure that children are protected from the practice.

Willy Buloso, Regional Coordinator for Africa of ECPAT International, who leads the organisation’s advocacy work against the sexual exploitation of children in the tourism and travel sector in Sub-Saharan Africa, also highlighted how his organisation’s successes could be adopted to assist in the fight against child labour.

Miralles explained how Fairtrade’s tech-centric approach to using a software tool to trace products throughout the food supply chain, such as farm sources of cocoa and fresh produce in Africa as well as spices in Indonesia, to retail level in the Northern Hemisphere, could also be used to bring transparency to the source of labour used to produced goods. The organisation co-created the tool to guide businesses to support a living wage for food producers and change the way farm trading occurs.

Fairtrade’s traceability tool could help to create transparency and accountability around this pressing problem, Miralles said.

“We are using the technology to unlock the value of the supply chain for the people at the start of it. We provide the software to trace every action in the supply chain, log in every buyer, trace products from producer to consumer, monitor quality, and whether goods are made by women and whether they are carbon neutral. We are creating a digital passport of our products,”  Miralles said.

“I can request proof a farmer was paid a certain price, and then the buyer can load up the information of the farmer and the price paid. This mechanism is relevant because it can also work to show whether a product is child labour free. We can pass this on through the whole supply chain and create intelligence,” she said.

She said consumers could log into a website, scan a product’s bar code, and find out more about its sourcing, and the tool’s intelligence could also be shared with courts in Europe, where necessary.

“We are bringing this to the consumer, and obviously, it is quite novel,” Miralles said.

She said consumers did not necessarily have to pay a higher price for Fairtrade products. There was leverage in the supply chain to ensure farmers obtained fair prices and that most profits were not made by wealthy Northern Hemisphere retailers.

Buloso, who is working to stamp out the child sex trade that accompanies tourism and travel on the continent, said it was “a great idea” for civil society organisations, not focused on fighting child labour to share insights.

He said the problem of child sexual exploitation did not involve mainly wealthy tourists from the North travelling to Cape Town and Zanzibar, as many assumed, but rather local people engaging in exploitation.

“The state of exploitation of children in prostitution is mostly by perpetrators who are based here in Africa in our countries. Perpetrators are among us,” he said.

Buloso added that 30% of child sex exploitation victims were boys.

“Something we can transfer from our work in (advocating against) sex exploitation of children, to the fight against child labour, is the code of conduct we developed to provide tourism businesses with tools to work together to fight sex exploitation,” Buloso said.

Buloso said the code of conduct, which included six criteria, could be used by organisations fighting against child labour.

The code of conduct criteria included:

Augustina Perez, Child Rights Senior Associate at the Bank Information Centre, which partners with civil society to spotlight risks and improve the transparency, accountability, and sustainability of development finance, said the World Bank had been proactive in addressing child labour.

“We have a project in the cocoa sector in Côte d’Ivoire (Ivory Coast). We know most child labour is in agriculture, and we know that together with Ghana, the country produces 60% of the cocoa in the world,” she said.

“The government (Ivory Coast) is a little resistant to putting child labour on the agenda, but the World Bank has been very proactive and has invited BIC to join a working group. We are trying to raise all the red flags and everything crucial to the Ivory Coast like taking (checking) IDs and addressing the root causes of child labour,” she said.

She said her organisation had presented the problem to the US government.

Ghana deputy minister of employment and labour relations, Bright Wireko-Brobby, speaking during an interview with IPS on the sidelines of the conference, said his government was committed to eradicating child labour. Ghana was the first country to ratify the UN Convention on the Rights of the Child in 1990 and then adopted it into its national laws.

“In Ghana, mostly the child labour issue can be found in the cocoa-growing areas and also pockets in the fishing and mining industry and the area of trade and commerce,” Wireko-Brobby said.

However, he said his government disputed a report by NORC at the University of Chicago which claimed that there were almost 1,6 million children involved in child labour in the cocoa industry in Ghana and the Ivory Coast.

NORC conducted surveys with children aged between 15 and 17 between 2008 and 2019 and revealed that cocoa production had increased by 62% in both countries. The report acknowledged that the governments of Côte d’Ivoire and Ghana had implemented education reforms such as free education and compulsory attendance to fight child labour and that school attendance of children from agricultural households rose from 58 to 80 percent in Côte d’Ivoire and 89 to 96 percent in Ghana.

Wireko-Brobby said his country had made gains in the fight against child labour.

“In recent times, we have ensured that every child should be in school. We have provided meals, lunch and breakfast for every child in Ghana. We challenged that commissioned study because we did not believe that despite our interventions, child labour would go higher. We are now domesticating some of the indicators,” he said.

He said his government would welcome an intervention like Fairtrade’s tool to ensure cocoa production is child labour free.

“There is a focus on private sector interventions in the cocoa industry where they are trying to make sure that there is not a point in the supply chain where they can trace child labour. The collaboration between the private sector and the government is strong, and we try to bring it into the mainstream. Every child must be able to enjoy their childhood,” Wireko-Brobby said.

This is one of a series of stories that IPS will publish during the 5th Global Conference on the Elimination of Child Labour in Durban, South Africa.

Should You Do A Buy Now Pay Later Vacation Loan?

Personal Loan Rates Have Dropped, But Should You Get One?