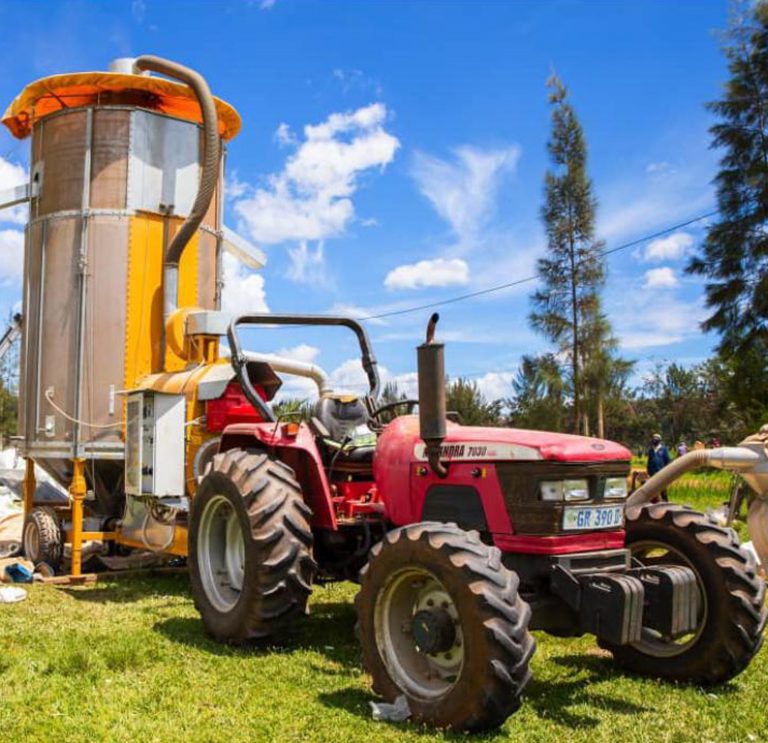 KIGALI, Rwanda, Jul 22 2021 (IPS) – Rwanda is trying to reduce post-harvest loss by relying on new technologies to increase the amount of food available for consumption and help smallholder farmers confront some challenges caused by the overproduction of staple crops.

For over 20 years, Cyriaque Sembagare, a maize grower from Kinigi, a mountainous village in Northern Rwanda, had survived on farming to feed his extended family but struggled with the loss of a significant portion of his harvest to rot. High levels of aflatoxin prevent farmers in remote rural Rwanda from selling maize to high-value buyers.

“I have been selling maize on the market, but I was given a low price because of the harvests highly perishable nature,” the 56-year-old farmer told IPS in an interview.

Post-harvest losses are high in Rwanda, with smallholder farmers losing an average of 27.5 percent of their production annually.

A comparison with the global and African scenarios indicates that Rwanda does well on preventing food loss and wastage (72.5 percent). The country is slightly lagging on average in sustainable agriculture (71 percent). It is among the lowest performers while tackling nutritional challenges (71.2 percent), according to the Barilla Center for Food and Nutrition (BCFN) sustainability index.

To boost resilience and reduce post-harvest losses, the government and different development partners have supported thousands of farmers facing several barriers, ranging from a lack of knowledge to poor market access.

The initiatives include innovative solutions in post-harvest handling to improve food security in this East African country. The country is ranked 59th among 67 countries on the latest Food Sustainability Index (FSI), developed by The Economist Intelligence Unit with BCFN.

While Rwanda is ranked on top among nine low-income countries, especially in Sub-Saharan African, the country is lagging in addressing food waste.

FSI research by the Economist Intelligence Unit, based on data from the UN’s Food and Agriculture Organization (FAO), indicates that in terms of annual food waste per head, Mozambique comes on top of African countries with 1.2kg, followed by Rwanda (1kg).

This high level of waste has prompted the government and partners to promote modern technologies to tackle post-harvest losses, including two types of dryer machines: Mobile grain dryer machines and Cob Dryer machines that tested successfully on maize, rice and soybean.

“The aim was to reduce the risk of crop degradation or contamination by different fungi which occurred when dried naturally and affects the availability of food,” Illuminée Kamaraba, the Division Manager in Post-Harvest Management and Biotechnology at Rwanda Agriculture Board, told IPS.

During the implementation phase, Rwandan researchers had embarked on testing Cob dryer machines on other crops like Roselle (Hibiscus). Some 400kg were dried before samples were taken to the laboratory to verify if the nutrients remained intact. This method focuses on limiting the harvests’ exposure to aflatoxin.

Before expanding the technology countrywide, a study to measure the impact of these innovations, especially the use of dryer machines, is planned for testing this year.

“The new technologies are complementary with some traditional methods for food preservation,” Kamaraba said.

Currently, Rwanda has acquired ten mobile dryer machines for the pilot phase to process 57 to 84 tons of well-dried and cooled cereals per day.

The mobile grain dryers mostly use electricity but could be connected to tractors to run on its diesel-powered burner where there is no electricity supply system.

For the cob dryer machine, its burner and fan depend on the supply of three-phase electricity and Liquefied Petroleum Gas (LPG) gas, while the cob container (the wagon) is a tractor-drawn vehicle.

According to official projections, the new technology, promoted through private and public partnerships (PPP), aims to help Rwanda achieve 5 percent of post-harvest losses by 2024 – down from the current 22 percent for cereals and 11 percent for beans.

Jean de Dieu Umutoni, one of the experts from Feed the Future Rwanda, Hinga Weze, a non-government organisation working to increase the resilience of agriculture and food systems to the ever-changing climate in Rwanda, told IPS that the idea behind this innovation was to increase access to post-harvest equipment and solutions

“This has been conducted through different channels such as grants, especially for smallholders’ farmers,” he said.

Both Umutoni and Kamaraba are convinced that for Rwanda to implement the public-private partnerships to reduce post-harvest losses, gaps in knowledge of smallholder farmers, especially in remote rural areas, need to be filled.

So far, Hinga Weze and Rwanda Agricultural Board (RAB) have worked together in developing some guidelines that allow the private sector to use the new technologies. Experts say, however, that the biggest challenge for farmers is that they lack information on how to access suppliers. In contrast, the suppliers lack information on the growers that need the equipment.

Umutoni says that while public-private partnerships could introduce good practices, the government needs to support the technological innovations for them to be scaled up.

“There is a good start with on use of mobile dryers to address food waste reduction, but the private sector needs to be engaged in other crop value chains,” Umutoni told IPS.

While it is the task of the government to initiate solutions, experts argue that the private sector has a role to play in ensuring the technology is sustainable.

One such example is Hinga Weze’s ‘Cob Model’. This project has enabled a private sector operator to assist farmers by using the first sizeable mobile drying machine in Rwanda. It has a capacity for drying 35 metric tons within three hours or about 100 tons per day. The NGO developed guidelines with the Rwandan government for the machine’s use.

Already, there is some indication that these technologies will be successful.

“Thanks to the adoption of smart post-harvest technologies, I was able to save half the crop that would otherwise have been lost,” Sembagare told IPS.