Are you prepping up for your first-ever press release distribution? You must be super excited to roll out the big news. But do you want to roll out a press release, OR do you need a media advisory?

Interestingly, I also didn’t know the difference between the two terms. In fact, I had no clue if there’s something like ‘media advisory.’ I just learned that and am about to share the same with you.

In this post, I’ve first defined the two terms – press releases and media advisories. Then I’ve shared some differences between the duo, followed by some similarities. And ways to write efficient content for the duo.

What is a Media Advisory?

A media advisory is an announcement written about a future event. It’s essentially an invitation to media representatives and includes only event details.

The key elements that usually make the media advisory include your company name, first and last name, email address, and phone number.

While writing a media alert, make you answer the 5 W’s:

What is a Press Release?

A press release is an official announcement from the company and is for journalists, media representatives, and other interested readers. It’s about sharing newsworthy information.

Unlike media advisories, press releases are anything that includes valuable information. It helps in brand awareness and recognition. It’s explicit content and can go as long as two pages (details to follow).

The key elements that make up a press release include a headline, a sub headline (optional), an opening paragraph, company logo, quotations, and contact information.

A press release is anything the company wants to share with the world. It may include:

Differences Between a Press Release and Media Advisory 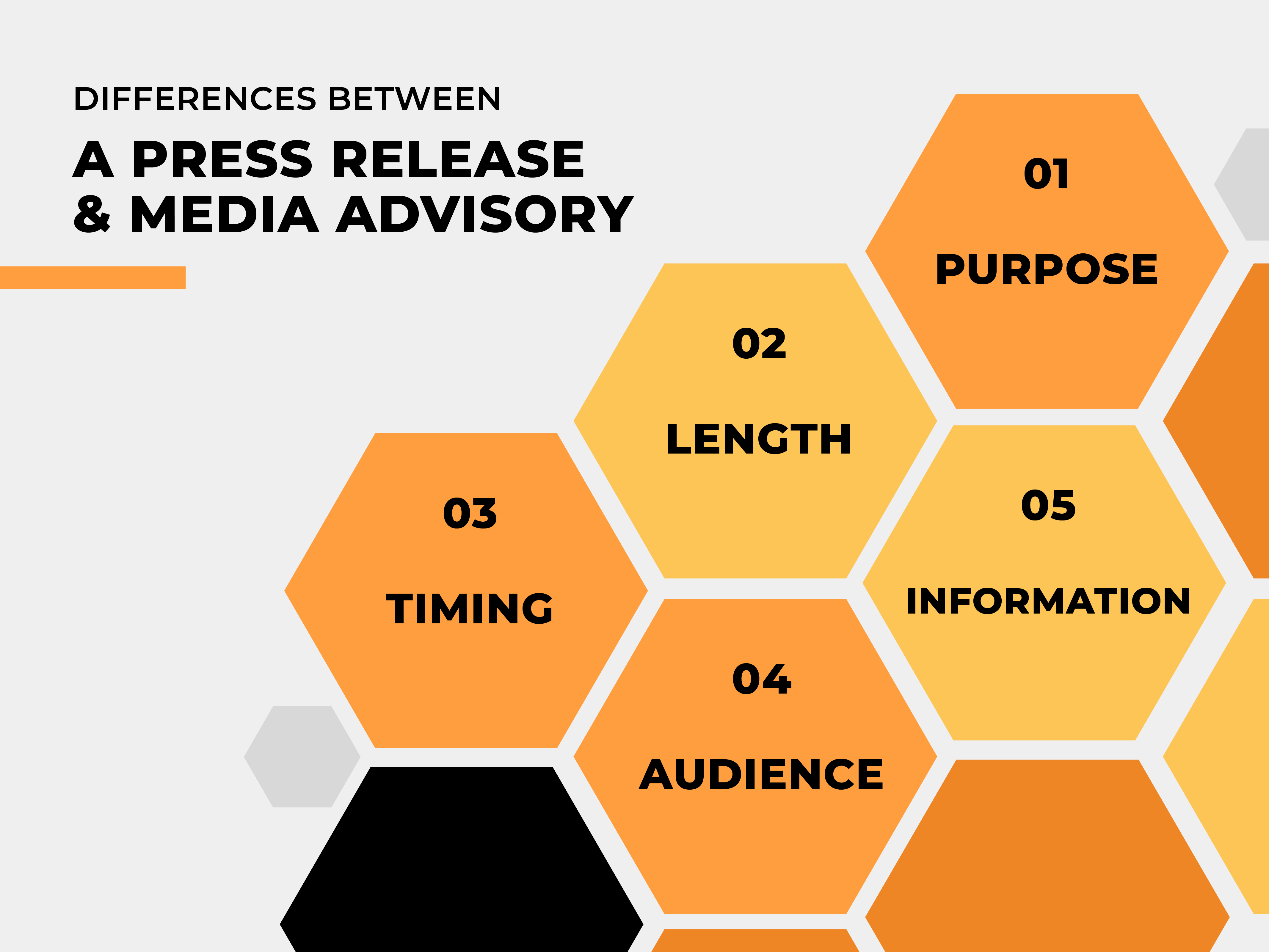 According to the definitions above, the purpose of press release distribution is to share details about the event or newsworthy announcement.

On the other hand, a media advisory is an official invitation to media representatives to attend an official event.

Since a media advisory is merely an invitation, it’s limited to 100 to 150 words. This count is enough for the required content.

The timings for media advisories will vary. The minimum time to roll out a media alert is three days. The best practice is to send the word 5-7 days ahead of the main event, followed by a reminder after 2-3 days.

Each type of content has a different audience. For media advisories, your target audience would be attending the event, such as media representatives.

Sending press releases to the masses is generally done by acquiring the best press release distribution services. Make sure you hire the best to reach a wider audience.

While writing a media advisory, keep the content short and precise. You don’t have to make it too detailed. Just talk about the critical plan and send an invitation to the right audience.

On the other hand, since press releases are pretty detailed, you can share a lot more information, which could be helpful to your audience.

Similarities Between a Press Release and Media Advisory

Unlike differences between the duo, there’s only one common similarity between a press release and a media advisory – both must include newsworthy content. It must not go out as a press release or media advisory if it isn’t valuable to readers. The best possible way to roll out the usual content is by writing blog posts.

Writing a Press Release and a Media Advisory

Now that you can define the two terms and differentiate between them, it’s time to draft the content.

There are usually seven steps to write an outstanding press release: 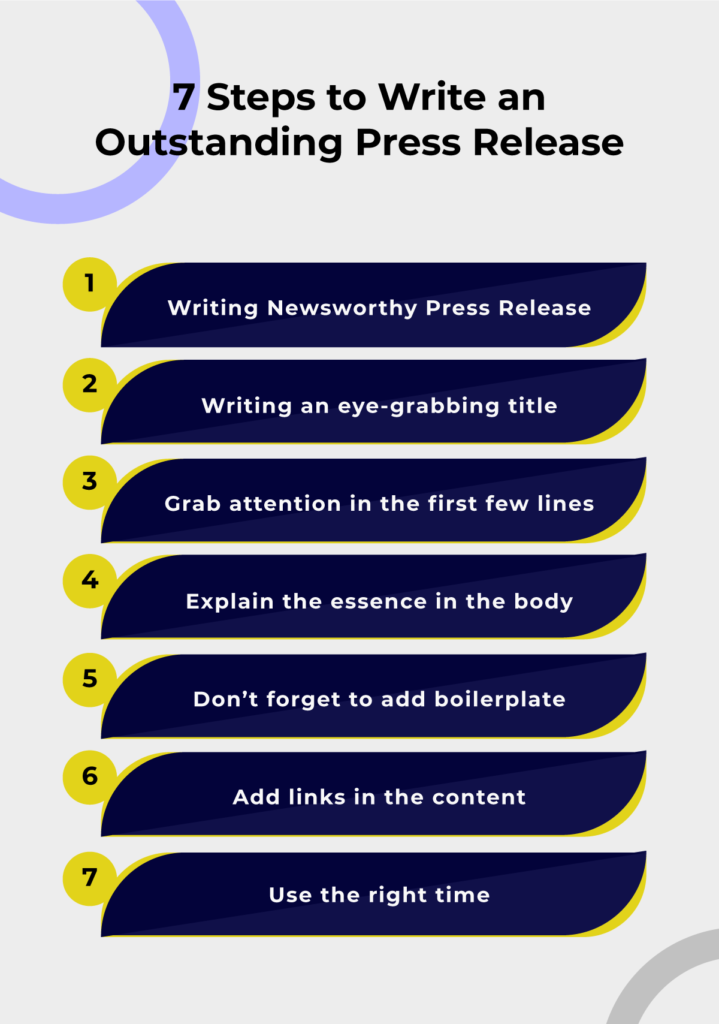 Being a separate entity, a media advisory has five essential parts. Cater these into the content and make it as effective as possible. 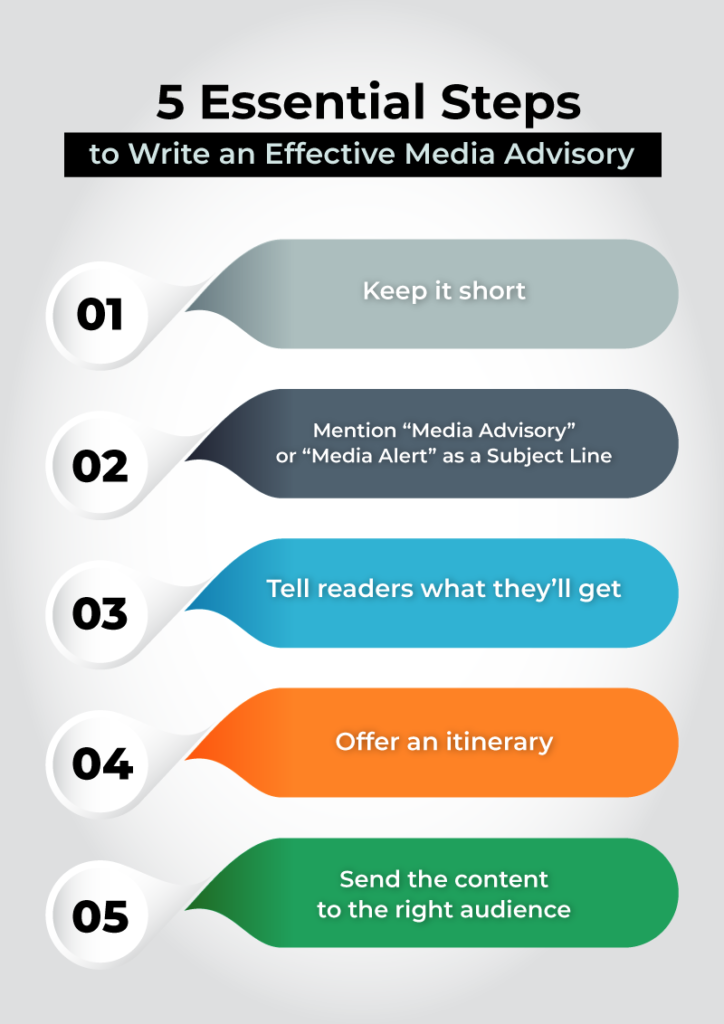 What NOT to do with a Press Release or Media Alert?

Both contents are super valuable for businesses. These aren’t random guest posts that you write and publish on third-party platforms. To make the best out of each, add all the relevant information. Don’t dodge your audience and come straight to the point.

For other types of content marketing, you may hire content marketing solution providers who’ll uplift your website’s ranking by writing and distributing relevant content across various platforms.

Both press releases and media advisories serve the same core feature – brand awareness. But both follow a different style and format.

Now that you’ve learned the basics and secrets about the two, it gets easier for you to choose the right thing at the right time and draft content that’s hard to ignore.

If you want to know more about press releases and media advisories, such as how to maximize ROI from distributing the two, you may reach out to iCrowdNewswire and get everything in your hand.