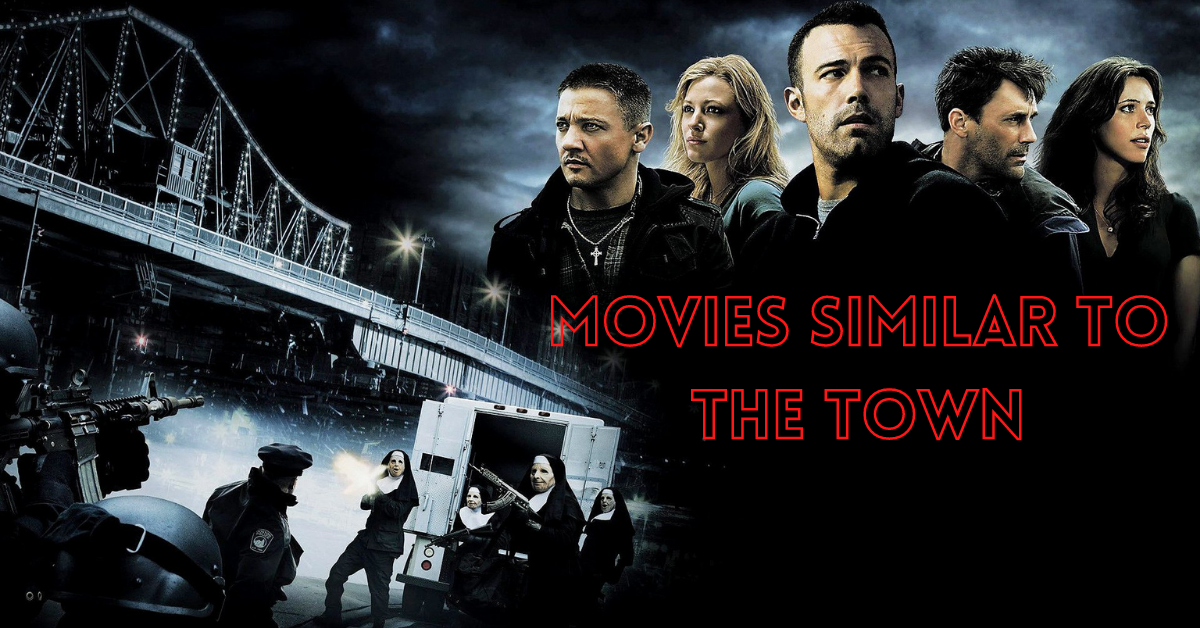 The Town is a crime thriller movie, starring Ben Affleck, Jeremy Renner, Jon Hamm, Rebecca Hall and Blake Lively. The movie follows the group as Boston bank robbers, who, for their final job, plan out a big score: robbing the Fenway Park. Released in 2010, the movie has been a successful one, earning $154 million against a budget of $37 million and garnering critical acclaim for the performance of the entire cast, especially Renner’s performance of his hot-headed character.

It is considered one of the most significant films of the genre, and the story itself is a thing of writing artistry. The movie reignited an interest in crime thrillers, particularly of the Boston-area stories that seem to be a Hollywood favourite, and as such, many people who watch the movie ask for movies similar to The Town.

The movie follows Doug, Affleck’s character, who, along with his childhood friends Jem, Gloansy and Dez as they rob a bank, releasing the assistant manager of the bank, Claire. Sometime later, Doug notices that Claire is actually a neighbour of his, and a budding relationship starts growing.

Knowing that Jem will kill her if he knows about her as a loose end, Doug is also aware that his relationship with Claire would also rub Jem off the wrong way. During their final score, Gloansy and Dez are killed when police surround them after they manage to steal $3.5 million from the park’s entrance, and Jem is injured. Irish mobster Fergie, with whom they work, had previously threatened Doug with Claire’s life, and despite Jem out of the way, Doug realises that with Fergie in the picture, Claire’s life would still hang in the balance, resulting in him shooting both the gangster and his bodyguard.

At the end of the movie, Claire tips him off to escape the police, which Doug does so by disguising himself. Since they can’t be together, Doug hides a bag of money in Claire’s garden, which she discovers, with a note in it reading that the money would be better used by Claire. We see Doug at the deck of a waterfront house, who is tired but safe as he looks out to the water. The movie, is well acted, well scripted and well planned, an experience that warrants a search for movies similar to The Town.

Look, its even got Irishman in the name. Directed by the crime-drama maestro Martin Scorsese and starring the big three of crime-drama: Robert De Niro, Joe Pesci and Al Pacino, The Irishman relates the story of Mafia hitman Frank Sheeran, as he sits in a retirement home and recounts the good old times with Russell Bufalino (Pesci), who is the head of a Pennsylvania crime family.

Through Bufalino, Sheeran is further introduced to Jimmy Hoffa, and the two start a friendship, with Sheeran eventually becoming Hoffa’s bodyguard. The film then depicts how the lives of the three intertwine, and the ending starts when Bufalino informs Sheeran that Hoffa has been marked for a hit as he is no longer tolerated by the crime bosses. Sheeran performs the hit reluctantly, and the rest of the mobsters and thrown into prison on unrelated charges.

As the movie ends, we see the priest leave Sheeran’s room after hearing his confession, and Sheeran requests him to leave the door ajar, reminiscing him of a habit of Hoffa’s. A future classic movie similar to The Town.

Once again, we see De Niro and Pacino team up, this time with Val Kilmer as a supporting actor, at opposite ends of the law. De Niro’s character, a career thief McCauley, is at odds with Pacino’s LAPD Lieutenant Hanna. Both play a cat-and-mouse game until the end, when the law prevails eventually.

However, the story that plays out between the two is what made Heat an instant classic. As a wary individual, McCauley never goes off the plan, and yet starts a relationship with Eade. Whereas Hanna is struggling to connect with his third wife and his stepdaughter Lauren. What follows is a game between the two, wherein Hanna keeps tabs on McCauley but lets him proceed with his plans, to the point where the two get together for coffee.

At the end of the movie, Hanna calls it in and catches McCauley when he ditches his flight to tie off a loose end. McCauley is killed by Hanna, and succeeds in connecting with his estranged wife and daughter. An instant classic, this one.

Starring Kevin Spacey, Russell Crowe, Guy Pearce and Kim Basinger, L.A. Confidential is one of those timeless classics that you just can’t put down, and with such a stellar cast, it’s easy to see why.

The story is equally engaging; with the three lead actors portraying Jack Vincennes, Bud White and Ed Exley respectively. All three are LA cops, and all three have their own ways of tackling the rampant Hollywood crimes that prevail in their areas. White struggles to keep his temper in check, especially against domestic abusers and is ready to break the rules to bring down anyone found involved in such.

Exley is the force’s golden boy with a mind focused and hell bent on being better than every other cop on the force. Last is Vincennes, a sleazy cop who looks for celebrity stories to make a quick buck off. All three join forces as they take on the L.A. crime, and the interwoven story is an absolute treat to watch. Another iconic movie of the ‘90s.

A story not meant for everyone with its dark, gritty tones and an equally dark story, Mystic River follows three childhood friends Dave, Jimmy and Sean in a twisted world that leaves them all scarred, some for life. We start with Dave, who is kidnapped while playing with Sean and Jimmy and later sexually abused by two pedophiles, by which

He is scarred for life.

We are then shown the life of Jimmy, an ex-con, whose daughter Katie is found murdered, allegedly by her boyfriend. On the case is none other than Sean himself, who, when conformed with the suspects and the story, falls back into his past.

The movie then depicts how the rest of the friends carry on; Jimmy, who lives with the ever-growing pain of having his daughter murdered, Sean, who has to see the investigation to the end and Dave, who struggles with recollections of his abused past. Gritty, violent and realistic, a movie for generations to come.

The Boondock Saints (Released in 1999)

The Boondock Saints, one of the best independent films ever made, according to many. Despite its virtually non-existent status in the industry mainstream, you cannot talk about legendary movies but then miss out The Boondock Saints; its that much of a big deal for the true connoisseurs of Hollywood.

It follows two brothers, played by Norman Reedus and Norman Patrick, Irish catholic fellows who take upon themselves, believing to have been directed by the higher authority, to cleanse their neighbourhood of all the crime that runs rampant. Gory, action-filled and fast-paced, The Boondock Saints then kicks it up several notches with Willem Dafoe as the FBI investigator who closes in on the boys wreaking havoc on all the gangsters in their neighbourhood.

The dialogue, the acting and the story are all A-class and phenomenal, and make The Boondock Saints a must-watch.

Ah yes, the quintessential Boston-Irish accent-filled movie. With every character in the movie doling out the typical Bostonite ‘fahk’ every now and then, The Departed is an absolute treat to watch for two reasons.

First is the director: Martin Scorsese. The second would be the cast, featuring Matt Damon, Leonardo DiCaprio, Jack Nicholson, Martin Sheen, Mark Wahlberg and Alec Baldwin. The Departed not only handles its business in the casting department, but also the performance department. Plus a Boston-Irish accent is always a hoot to watch.

The Departed follows two men as they lead double lives in two organisations; Costigan, an undercover cop is assigned with the task of infiltrating mobster Costello’s outfit. Meanwhile, Sullivan, a man hand-picked by Costello gets into the state police, and the game begins. Who can identify the other first and blow their cover?

An absolute masterpiece of directing, acting and story. 10/10 would watch again.

Starring an ensemble cast including Johnny Depp, Joel Edgerton, Benedict Cumberbatch, Kevin Bacon and Dakota Johnson, Black Mass is as Boston-Irish gangster as it gets.

It tells the story of the infamous FBI-informant and gangster James Bulger aka Whitey, and his relationship with FBI agent John Connolly, who takes their relationship from informant-handler to a pretty close one, one that exchanges gifts, barbecues and whatnot. Essentially a story of how a federal agent got swayed by a gangster, Depp plays Whitey the gangster, as he becomes an informant, with his handler Connolly (played by Edgerton), delving in deeper and deeper into the gangster lifestyle.

The pair’s camaraderie is only broken up when a bulldog US Attorney shows up, threatening the relationship between the two, and giving an ultimatum to the FBI to arrest Whitey. At the conclusion, we see Connolly’s co-worker provide information about the Whitey-Connolly connection to a local newspaper, resulting in the arrests of all those involved, except for Whitey.

A movie better left for the intellectuals to understand and enjoy, State of Grace is yet another Irish-American gangster movie that ends up with everybody slumped with a bullet or several lodges deep inside them.

You might not have heard about this movie, because, well, around the time it was Released, some movie called GoodFellas was doing its round, getting into the cultural zeitgeist of the ‘90s, stole the show and the audience from it. And yet, State of Grace is still a good movie in its own right.

It tells of an undercover cop Terry (played by Sean Penn), who returns to Hell Kitchen and finds his friend Jackie (Ed Harris) working with the Irish crime family, run by his older brother Frank (Gary Oldman). Despite confessing to Jackie’s sister about the reality of his employment, Terry continues as a member of the family, until the older brother is forced to kill the younger Jackie, while Terry calls the cops in. The movie ends with Terry going down in a hail of bullets alongside Frank and his gang. A lukewarm movie, at best.

Killing Them Softly (Released in 2012)

With Brad Pitt as the lead actor and an assassin for the Italian mafia, Killing Them Softly is a movie that pivots solely on the lead actor and the performance, despite the story promising more potential than earning just $38 million.

It follows a gang of amateurs as they rob a Mafia-backed poker game, and the two hitmen who are sent to eliminate them.

The entire movie is good, the acting is on point, but there’s still some left. One of the many movies similar to The Town.

The last Martin Scorsese flick on this list, we had to include Gangs of New York in this list, because it very well might be the quintessential Irish-American gangster movie.

It tells the story of how a gangster’s son takes revenge on his father’s murdered, a rival gangster. Starring Leonardo DiCaprio, Daniel Day-Lewis and Cameron Diaz, Gangs of New York is a must-see film that perfectly emulates the Irish-American rivalry with the Italian-American mobs in early 20th century New York. This one is an instant classic.