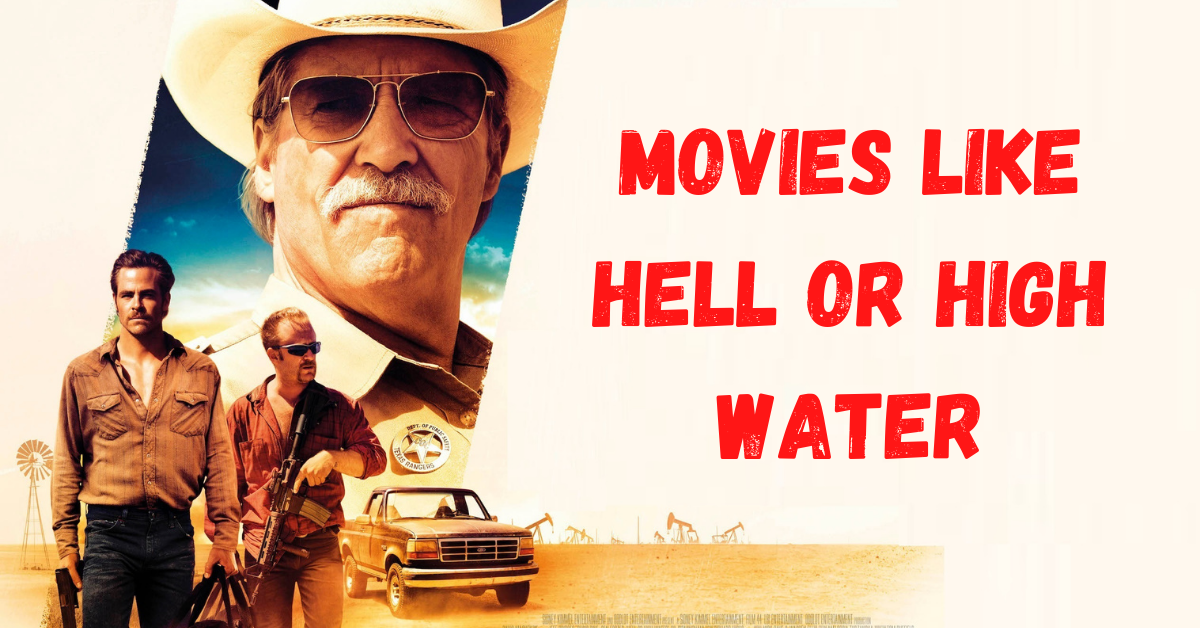 The genre neo-Western crime has got loads of good movies to offer. With actors like Clint Eastwood gracing the screen through projects on said genre, it has since grown to include many more artists, new directional debuts and storylines, among the best of which is the topic of today’s discussion: Hell or High Water.

A proper neo-Western crime drama, the movie follows two brothers who hit a series of branches of the same bank to pay off the mortgage on their family ranch. The story, the setting, the ambience and the screenplay all evoke the typical streak of Western-American culture, full of cowboy hats, Texas Rangers and that yee-haw accent. So if you liked the movie, here are more movies like Hell or High Water and a list of movies similar to Hell or High Water.

To start off, the movies stars Chris Pine, Ben Foster and Jeff Bridges in the lead roles. The story is set in West Texas, with brothers Toby and Tanner who rob various branches of the Texas Midlands Bank to pay off their mortgage of the ranch to the same bank, which is nearing foreclosure due to non-payment after their mother died.

Further adding a twist to the story, oil has recently been discovered on the ranch, and the brothers don’t want the bank to get their hands on it, wanting instead that the oil revenues provide for their families. However, sheriff Hamilton and his deputy Parker are hot on their trail, eventually culminating in Hamilton shooting and killing Tanner while in pursuit. The younger Toby escapes, and the end is dictated by a meeting between Hamilton and Toby; both men promise retribution to each other, and the credits roll.

An incredible movie, and after watching it, we’re positive you’ll start looking for movies like Hell or High Water.

So, without any further ado, here is a list of movies similar to Hell or High Water.

One of the most psychologically stimulating movies made in the Western crime genre, No Country for Old Men combines a stellar cast, with phenomenal acting and a storyline that will take more than one sitting to fully understand,

but once you do, boy does it get fun. While younger and more action-oriented audiences will find it slow-paced and boring, the movie is masterfully directed and written. It follows hitman Anton Chigurh as he tracks down Moss, who has taken $2 million of drug money from the scene of a botched drug deal.

Chigurh is methodical and follows a strict set of rules prior to killing anybody and on his tail is local sheriff Ed Tom Bell, who can’t fathom out the killings. The movie ends when Chigurh breaks his rule of killing and is immediately injured in a road accident.

The film is very much similar to Hell or High Water but way more engaging, if you have the patience to sit through it.

A movie publication wrote about Out of the Furnace like this: while it may be an opportunity-lost kind of movie, the casting choice makes a pretty strong case for the movie. Indeed, the casting is stellar for the movie which tanked at the box office: Christian Bale, Willem Dafoe, Woody Harrelson and Casey Affleck are just the top cast, with more to follow.

So with a story involving the descent of two blue-collar brothers into crime and the fighting world, you might be wondering why Out of the Furnace did not fare much better. And to be truthful, we ourselves are struggling to find the answer. But the fact is, as far as Western crime dramas go, this movie is a solid contender and stands its ground, at least in the casting department.

As for the movie, it follows brothers Russell and Rodney, who, living in the American Rust Belt, struggle to make ends meet, with Russell working at a steel mill and Rodney fighting illegal bareknuckle matches. After a deal goes awry, Rodney disappears, leaving Russell to look for him in the aftermath.

What you make out of the movie is obviously up to you, but we think that it is a good movie like Hell or High Water.

Also Read: Movies similar to The Town: List of Best 10

You’d think Briton Christian Bale would stick with either British or the Northern accent, but no, here we have Bale clock in as a Southern ranch owner, and he delivers a surprising performance.

Based on a short story by author Elmore Leonard, 3:10 to Yuma is about Bale’s character, Dan Evans, a war veteran turned rancher, who with his two sons, faces the wrath of local strongman Glen Hollander. The movie follows Evans as he struggles with yet another contender, Ben Wade, a local outlaw who crosses paths with Evans in unfortunate circumstances.

As the story progresses, the Pinkerton Detetctive Agency comes in to bust Wade, but fail, leading to them issuing a $200 reward on him, which Evans tries to collect. At the climax of the film, Evans and Wade make up, but the former is shot by Wade’s henchmen, and in the heat of the moment,

Wade turns on his entire crew, killing them off and allowing Evans to claim the reward. He then boards a train to the Yuma penitentiary, and plans his escape, making sure that Evan’s kids get the reward. The movie is touching and perfectly encapsulates the Wild West and the crimes that were perpetrated there.

Another Western crime drama classic, Extreme Prejudice follows two former classmates and friends who now find themselves at odds against each other. One is a Texas Ranger named Jack Benteen, a tough, macho guy who tolerates no lawbreaking at all.

At the other end of the spectrum, we meet Cash Bailey, an informant turned drug lord who runs his operations from the other side of the border. Old friendships cast aside, the two start clawing at each other’s throats after Bailey asks his old pal Benteen to either look the other way while he’s going about his business, or suffer death at his hands.

The movie then shows how a ghost group of US Army gets involved in the fighting between the two former friends and at the end of the movie, Bailey and the ghost group get killed in an enormous gunfight that engulfs an entire Mexican town, with Benteen emerging as the survivor (among the few to do so), after the commander of the ghost group reveals himself to be a partner of Bailey.

The movie, in true Western style, features a lot of mannerisms from the West Texas region, and is a movie very much like Hell or High Water.

One of the better Western-crime dramas with a female character in the lead role, Sicario was nominated for three Academy Awards, which should tell you the quality of the acting and filmmaking involved in the project. Sicario follows FBI agent Kate Mercer and CIA operative Reggie Wayne, who begin work on a joint operation by DoD/ DoJ, aimed at bringing down the Sonora Cartel that operates out of Mexico, flooding the other side of the border with drugs, killing police and agency officials in the process.

Teaming up with Alejandro Gillick, an apparent Mexican law enforcement officer, Kate soon discovers that while on surface the operation is heading in the direction, the real reason why so much violence was being perpetrated on the cartel members still eludes her, causing her to doubt the directives and the real intentions of the mission and especially Gillick, who holds particular grudges against the cartel members.

At the climax and the ending of the movie, Kate only learns about Gillick’s true intentions and identity after he forces her to sign a document that states that the operation was fully legit and was not undertaken at the behest of a singular individual,

Certainly not someone pursuing justice against the people responsible for killing his daughter and wife, back from the time when he was a prosecutor in Mexico City. Hearing all this and realising that she was just another accomplice in the pursuit of a man looking for justice, she tries to kill him, but cannot, seeing as the entire fiasco was justified due to horrendous actions of the Sonora Cartel not just against Gillick’s family, but also against the many other policemen and agents that were killed mercilessly at the hands of the cartel members. The movie ends on a poignant scene, making it one of the best movies like Hell or High Water.