Hall of Fame Prog-Rocker and Fusion Pioneer together again with Michael Lewis on Some People. 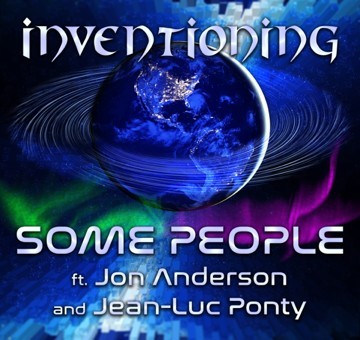 Coeur dʼAlene, Idaho, Oct. 29, 2021 – The magnificent pairing of Jon Anderson, the voice of YES, with world-renowned violinist Jean-Luc Ponty saw its one and only album release in 2015 and its final tour in 2017.

Now, one more song has been added to their legacy with the release of Inventioning’s new high-octane single: Some People, co-written by Jon Anderson and Michael Lewis (the original co- founder of the group that became the Anderson-Ponty band).

“Jean-Luc rarely plays on other songs but I approached him with Some People Album Cover this one in 2012,” Lewis said. “He listened to the song, liked it, and agreed to record on it.” For Jean-Luc Ponty fans, the song features a jazz-fusion style violin solo that only he could play. “I really enjoyed recording as a guest on this track by Michael Lewis” Ponty remarked in a September 30th Facebook post about the upcoming release.

Inventioning, a dark horse on the Prog Rock scene, has gained recognition as an up- and-coming powerhouse with an all-star lineup and a unique sound. “Prog fanatics, meet your new under-the-radar favorite,” says Northwest Music Scene.

Some People is the second Inventioning single to feature Jon Anderson on vocals. Walking Talking, another Anderson/Lewis co-writing collaboration, was released in 2014. Alison Henderson of progarchy.com commented: “With or without Jon Anderson or Jean-Luc Ponty, it sounds as though Inventioning could be one of the next big Prog happenings.”

Unreleased until now, “Some People was the very first Anderson-Ponty recording, and may be the last in their combined legacy,” said producer Michael Lewis. “We’re glad it’s finally seeing the light of day. It brings everything full circle, and it’s a new beginning for us as the Inventioning Band.”

Inventioning songs are available from Apple iTunes, BandCamp and all major digital outlets. Visit http://inventioning.net for more information and to receive updates.