Is Southpaw Based on a True Story? Here is the Answer. 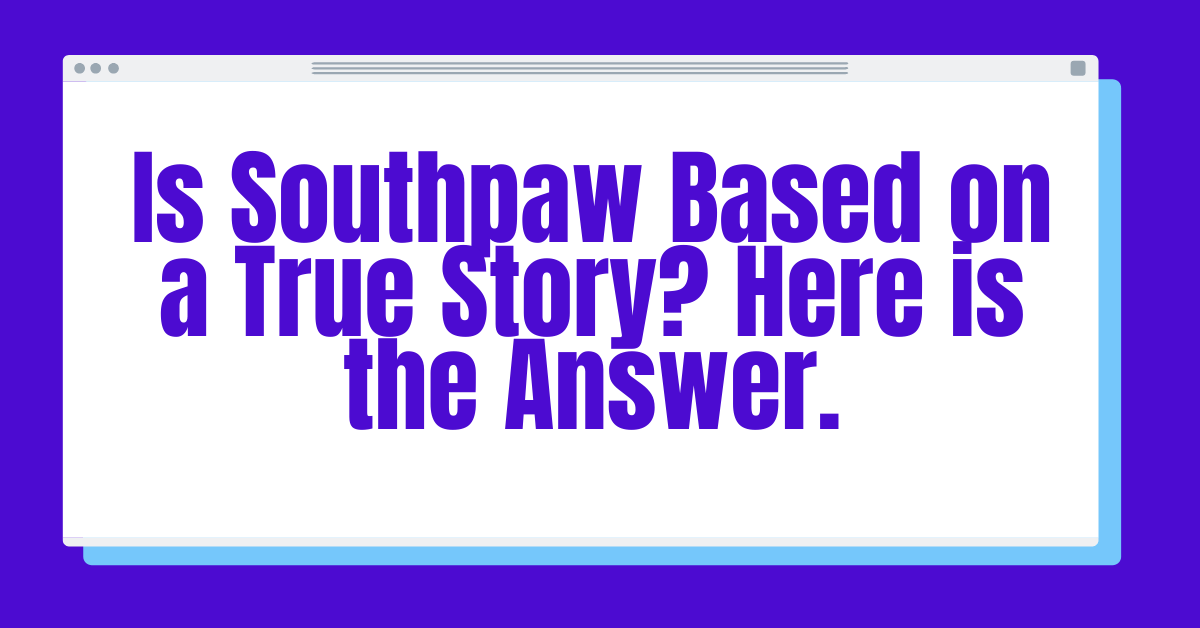 Southpaw is more commonly associated with boxers and with the 2015 movie. Although the popular definition of southpaw traces its usage back to boxing traditions, a more linguistic definition of southpaw would refer to a person being left-handed. That being said, the popular usage of southpaw for left-handedness was by boxing terminologies, wherein a majority of boxers were right-handed, with the minority of left-handers being called southpaws. This led to it becoming a mainstay in boxing lexicon. So, with that being said, today we’ll look into the question: is Southpaw based on a true story? And whether the story of Billy Hope is a true one.

For starters, and before we get into the historical debate of what the director said about the movie, let us be absolutely clear when we say that Southpaw is NOT based on any true story, and nor is Billy Hope a real person. However, there are several congruences between Southpaw, Billy Hope and a larger-than-life character, but that we’ll discuss later on. For here, Southpaw is not based on a true story, and there is no character that Billy Hope has been modelled on, considering his career choices.

With that clear, and keeping in mind the popularity of the movie starring Jake Gyllenhaal, we will answer a few frequently asked questions about the movie, the character, and some tidbits regarding the popular culture that seems to engulf Southpaw.

Is Southpaw Based on a True Story?

Right off the bat, we can tell you that while it is loosely based on an another figure’s story, Southpaw as a boxing movie is not based on an any real-life boxer, and so goes for Billy Hope, who is a character, although loosely based on a real-  life tough guy, isn’t actually a boxer or in any way related to the sport of throwing punches for a living.

Considering the boxing terminologies and the conviction with which the cast acts, you’d think that a real-life Billy Hope was behind the sets, directing Gyllenhaal to do this and that, and how the turbulent life got him to where he is. But the reality is, that Southpaw isn’t based on a true story. There isn’t a boxer named Billy Hope, although many boxing professionals were consulted during the shooting of the film.

Is Billy Hope Based on a Real-Life Boxer?

You could say that Billy Hope could be based on one of the many athletes that made a spectacular comeback during their time in the sport, but the movie does not credit anybody, and neither is the story close enough to the story of any such boxer, which would imply that Billy Hope is just a generic character, modelled after the spirit of athletes to make a big comeback after falling out. So, no, Billy Hope isn’t based on a certain real-life boxer, but he is based on another character, unrelated to boxing, but still had a part in the process of the movie.

If not a True Story, What is Southpaw Based on?

Southpaw is not based on any true boxing story, and neither is Billy Hope derived from a real-life boxer. It does, however, share a real-life connection with a fighter in his own right, someone who had an association with the movie itself. And its none other than Slim Shady himself, Mr Marshall Bruce, popularly known as Eminem. Yes, this boxing movie is based on the rapper and hip-hop personality, and as many die-hard fans of the artist or the movie might already know, the soundtrack for the movie, the titular album Southpaw was composed exclusively by Eminem, including memorable songs like ‘Phenomenal’ and ‘Kings Never Die’.

The story of a man rising from the deepest pits of despair to battle whatever is thrown at him to succeed was inspired much in part from the life of Eminem himself, who led a pretty rough life before breaking out from the suburbs of Detroit to become the rap star. The life of Billy Hope in a way, then, reflects the kind of life the hip-hop artist has spent over the decades, which is where the overall inspiration for the film came from. The boxing connection was latched onto it from the start, as a way of differentiating it from 8 Mile, a movie about Eminem’s life. It was considered to bridge as a sequel to the biographical movie, as the first choice of actor for Billy Hope was Marshall himself.

ALSO READ: Best Movies to Watch On Your Birthday

Is Billy Hope Based on Eminem?

Yes, Billy Hope is loosely based on the hip-hop artist, keeping in view the rapper’s struggle coming up in the entertainment world.

Who is the best southpaw boxer?

Considering the term southpaw as a euphemism for being left-handed, many argue that the greatest southpaw boxer is Marvin Hagler, although a strong case could also be made for Manny Pacquiao.

Why did Bruce Lee fight southpaw?

Despite being right-handed, Bruce Lee was often seen fighting southpaw, which according to him, was to lure his adversary into a false sense of security over using his weaker, non-dominating hand to fight.

Do you have to be left-handed to be a southpaw?

According to the vernacular definition of the word southpaw, yes, a left-handed person is a southpaw so you’d either have to be a natural lefty or train to be ambidextrous (using both hands with equal skill and dexterity).

Yes, as is evident by many boxers and fighters including Bruce Lee. You need not be particularly proficient in it, but fighting southpaw can either be used as a trick to confuse the adversary, or to free up your dominant hand to land the finishing blows.

How do You Know if you’re a southpaw?

If you’re left-handed, which means your choice of hand by default is left, you are a southpaw (according to the boxing terminology).

Is Southpaw Worth Watching?

If you like boxing, uplifting stories about comebacks and are in need of some motivation, Southpaw could be worth watching.