In a Watershed Year for Climate Change, the Commonwealth Secretary-General calls for Urgent, Decisive and Sustained Climate Action 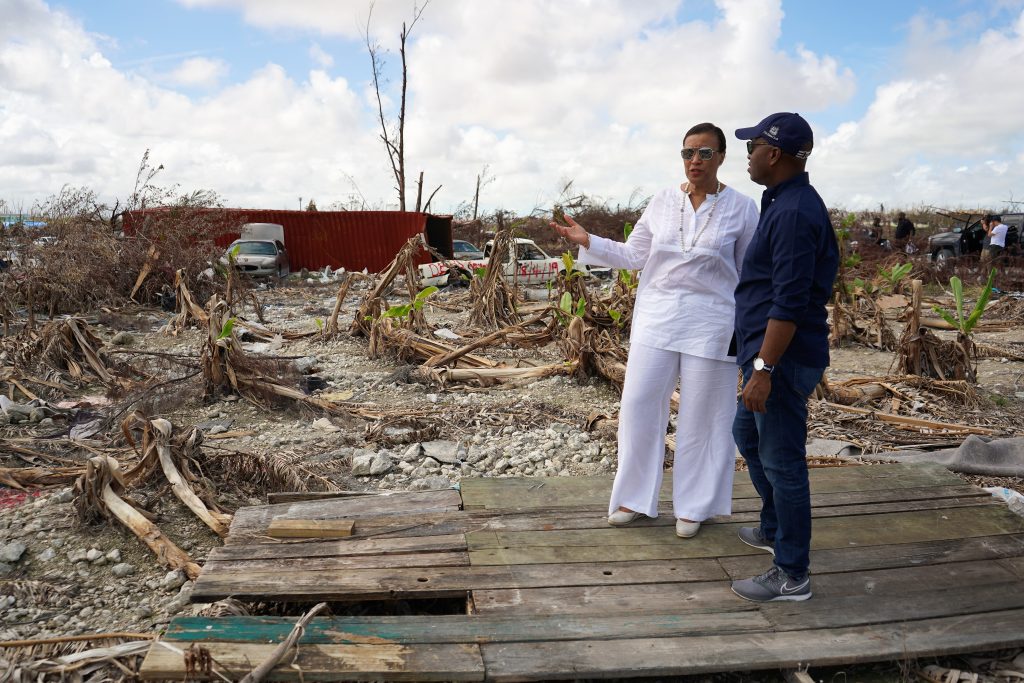 Commonwealth Secretary-General Patricia Scotland in The Bahamas after Hurricane Dorian. Scotland expressed concerns about the impact of climate change on exacerbating superstorms, like this 2019 event which took a massive human toll. Credit: Commonwealth

London, Sep 8 2021 (IPS) – This November, five years after signing the Paris Agreement and pledging to limit global warming to 2 degrees Celsius above pre-industrial levels, with a further target of below 1.5 degrees Celsius, world leaders will meet in Glasgow, UK amid COVID-19 pandemic shocks, rising hunger and an Intergovernmental Panel on Climate Change report that warns of more extreme temperature, droughts, forest fires and ice sheet loss due to human activity.

Out of the 197 countries which signed the Paris Agreement, 54 are members of the Commonwealth. That association has been helping its members to craft their national climate targets and follow through with implementation.

IPS spoke to Commonwealth Secretary-General the Rt Hon Patricia Scotland QC about the Association’s climate initiatives, the unique challenges faced by small states, its focus on gender mainstreaming and access to financing for critical adaptation and mitigation projects.

Scotland is the sixth Secretary-General of the Commonwealth and the first woman to hold the post. The Commonwealth is an association of 54 countries that work together to advance shared values enshrined in the Commonwealth Charter, including democracy, human rights and sustainable development.

===========
Inter Press Service (IPS): Secretary-General, it is a pleasure to be able to interview you from a small community in Dominica. Dominica continues to be proud of not just being a member of the Commonwealth but the land of your birth and the home of the Baroness Patricia Scotland Primary School.

In Dominica, we know that the Commonwealth is invested in climate change, and I’m happy to be speaking to you about one of the most pressing issues of our time.

The IPCC report has been dominating the climate change headlines in the lead-up to COP26. It is a sobering report that calls for urgent, increasingly ambitious action by world leaders to tackle the climate crisis. What does the report mean for the 54 member countries of the Commonwealth?

The Rt Hon. Patricia Scotland QC (PS): The latest IPCC report is a stark warning for humanity. One cannot argue with the definitive scientific evidence in the report, which shows how climate change is intensifying on a global scale, with widespread impacts. Some of these impacts are unravelling on our television screens and even right before our eyes, including increasingly destructive extreme weather events – from monstrous super storms in the Pacific and Caribbean to deadly floods in Africa and raging wildfires in Europe.

In many ways, the report reaffirms many of the concerns the Commonwealth has been advocating for over the past 30 years, particularly in relation to small and other vulnerable states. It also challenges us, as an international community, to respond – urgently!

We no longer have any excuse not to act. We already have a blueprint for international cooperation in the form of the Paris Agreement. What’s more, emerging from the Covid pandemic, we have a critical window to set a new development path and build back better. What the world needs now is urgent, decisive and sustained climate action. As I’ve always said: if not now, then when; if not us, then who?

(IPS): We know that Nationally Determined Contributions (NDCs) are important to gauge how each country intends to do its part to reduce global warming. We also know that new NDCs should be submitted every five years, but some countries have not met the deadlines. How is the Commonwealth assisting member countries with articulating and submitting their NDCs?

(PS): The Nationally Determined Contributions – or national climate plans – are at the heart of the Paris Agreement. I cannot overstate their importance. It is through the NDCs that we translate this global agreement into reality on the country level.

This is why the Commonwealth Secretariat is working with the NDC Partnership to support governments in enhancing and delivering their national climate plans under the Climate Action Enhancement Package (CAEP).

Through this initiative, we embed highly skilled Commonwealth National Climate Finance Advisers in countries to fast-track the process. In Jamaica and Eswatini, our experts help create frameworks to include climate-related spending in national budget planning. In Belize and Zambia, our advisers assist in developing national climate finance strategies.

(IPS): How can Commonwealth countries help each other with their NDCs submission and implementation?

(PS): The Commonwealth is a family of 54 equal and independent nations, spanning five geographical regions with a combined population of 2.4 billion people, 60 percent of whom are under age 30. Thirty-two members are considered ‘small states’, while we also have some of the world’s biggest economies along with emerging countries in our group.

One of the most valuable aspects of the Commonwealth is, therefore, its diversity and incredible capacity to be a platform for countries to share experiences on a wide range of global issues, examining what works and what does not work and cross-fertilising ideas. Building on this, the Secretariat organises regular virtual events, convening a range of actors from different regions and sectors to exchange knowledge and best practices for climate action.

We also welcome the generous financial and in-kind support from member countries such as Australia, the United Kingdom and Mauritius, which enables the work of key programmes like the Commonwealth Climate Finance Access Hub and the CommonSensing Project (funded by the UK). The CCFAH ‘hub and spokes’ model ensures a dynamic network of expertise and a useful mechanism for cross-regional dialogue and international cooperation around NDCs.

(IPS): Access to finance for climate adaptation and mitigation initiatives continues to be an issue of concern, particularly for small island developing states. What mechanisms have the Commonwealth Secretariat established to assist countries in financing their climate commitments?

(PS): Funding for climate action is absolutely critical for the survival of our small and vulnerable member states. However, a concerning paradox is that countries most vulnerable to climate change are often the ones that find it most challenging to access climate finance.

This is mainly because they have constrained resources or capacity. For example, a small island developing nation may have just a small ministry or unit dedicated to climate change, and a single officer, if any, focused on mobilising finance. When you look at the complex requirements, application processes and varying criteria set by different international climate funds, it is clear there is a gap.

Consequently, many countries can spend months and even years working through the process to access finance, delaying climate action whilst impacts are ongoing.

This is why the Commonwealth Climate Finance Access Hub (CCFAH) was initiated in 2015, whereby long-term Commonwealth national climate finance advisers are embedded in government departments to help them develop successful funding proposals, and who then pass on the knowledge and skills to local officials and actors. As of June 2021, CCFAH has helped raise US$ 43.8 million of climate finance, including US$ 3 million of country co-financing for 31 approved projects. More than US$762 million worth of projects are in the pipeline.

We are also looking at innovative ways to fill the data gap in project proposals. Under the CommonSensing Project, we work with UNITAR-UNOSAT, the UK Space Agency and others, to use earth observation technology and satellite data to build more robust, evidence-based cases for climate finance in Fiji, Solomon Islands and Vanuatu.

(IPS): According to agencies like UNICEF, women and girls are disproportionately impacted by climate change – a reflection of patterns of gender inequality seen in other areas. Are you satisfied with the work of the Commonwealth in ensuring gender integration across climate change initiatives?

(PS): To tackle climate change, we simply cannot ignore the role of half the world’s people who are women. In fact, the most recent Commonwealth Women’s Affairs Ministers Meeting in 2019 reiterated gender and climate change as one of four priority areas on gender equality. It is absolutely a top concern for the Secretariat, which is committed to mainstreaming gender across its work programmes.

All our regional/national climate finance advisers are expected to mainstream gender and youth considerations in their operations. All their projects must be responsive to the needs of women, men, girls and boys, as equal participants in decision-making and beneficiaries of climate action.

For instance, the Commonwealth National Climate Finance Adviser in Jamaica helped the government secure a grant of US$270,000 from the Green Climate Fund for the project ‘Facilitating a Gender Responsive Approach to Climate Change Adaptation and Mitigation’.

The Secretariat recently launched a gender analysis of member country climate commitments. This research will help us better understand the current situation and inform future activities and programmes.