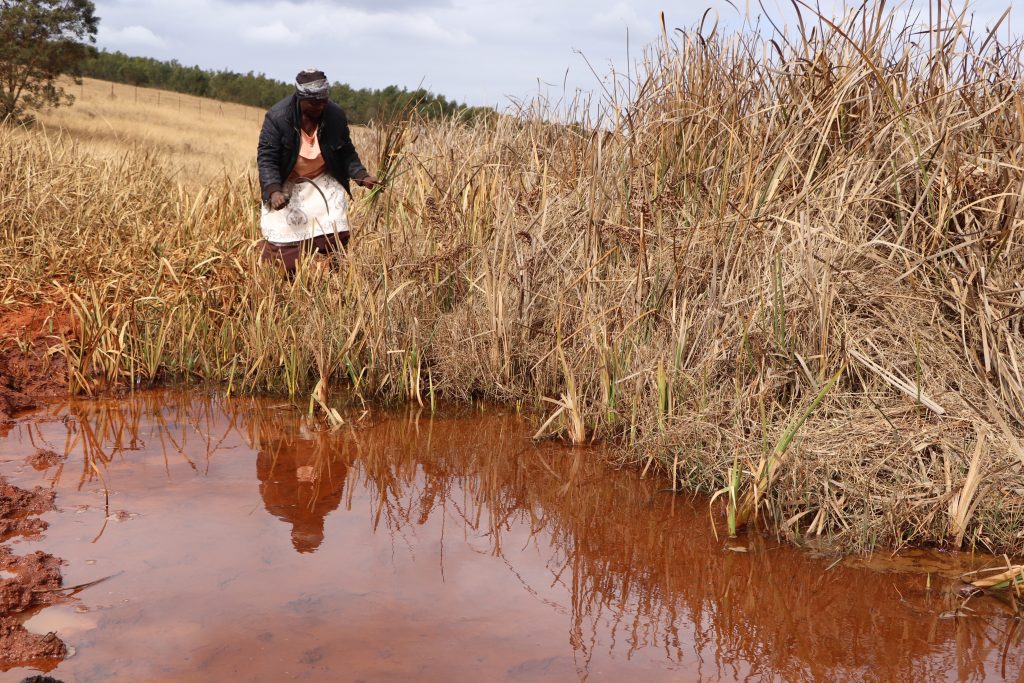 Sibonisiwe Hlanze is one of 600 women who are allowed to harvest reeds from the Lawuba Wetland in Lawuba, Eswatini. Hlanze’s income and security is dependent on reliable weather patterns. The Commonwealth has deployed top climate finance advisors to Eswatini, Belize, Seychelles and Zambia assist with the NDCs. Credit: Mantoe Phakathi/IPS

Eswatini, Oct 22 2021 (IPS) – There is no country today that has not experienced the effects of climate change, from changing weather patterns to extreme, devastating weather events.

The Kingdom of Eswatini is no exception.

Climate change is already affecting the country and key sectors of its economy. It is already having to adapt to pronounced climate change impacts, including significant variations in precipitation patterns, higher temperatures, and increasing frequency and intensity of severe weather events such as droughts, floods, and cyclones.

In 2015, at the United Nation’s annual global climate summit COP 21, the Paris Agreement was hammered. In 2016 Eswatini joined many other countries in signing up to the Paris Agreement, a landmark agreement committing nations to a global effort to tackle climate change.

The Government of Eswatini submitted its first NDC to the UN Framework Convention on Climate Change (UNFCCC) in 2015. But since then, technology, policies, partnerships, data, and stakeholder engagement for climate action have all advanced.

In preparing its second NDC, the government looked to take these advances into account. It went back and reviewed what it had done in 2015 and sought to this time provide an NDC with even greater ambition.

Over a period of 18 months, an inclusive process of assessment, analysis, and modelling of climate change, informed by data and science, was implemented to revise the NDC.

Climate change will affect everyone, and as such, the government put stakeholder participation at the heart of the revision process.

Adopting ‘a whole of government and society approach’ it held over twenty stakeholders’ consultations including virtual and physical workshops. A review of national gender policy to integrate climate change was also carried out.

The process was not always smooth though. There were significant hurdles, not least the Covid-19 pandemic which not only delayed the expected submission of NDCs at the end of 2020 but impacted Eswatini’s technical capacity to undertake such a nationwide participatory stakeholder’s consultative process.

However, these challenges were overcome, and the revised NDC, submitted to the UNFCCC just days ago ahead of COP26, represents an ambitious step-up from its 2015 predecessor.

It adopts an economy-wide GHG emissions reduction target of 5% by 2030 compared to the baseline scenario[1] to help achieve low carbon and climate-resilient economic development. It also includes a provision to raise this target to 14% with external financing, technology, and technical support. This translates to 1.04 million tonnes fewer GHG emissions by 2030 compared to a baseline scenario.

Alone, however, the ambition of this NDC will not be enough.

The opportunity created by the Paris Agreement comes with an important challenge – to transform the NDC into tangible actions that lead to long term zero-carbon and climate-resilient development.

The effective implementation of the revised NDC is contingent on several factors, key among these being the availability of external support in terms of the provision of means of implementation (finance, technology development, and transfer and capacity building) and domestic resources.

Climate finance must be mobilised at scale to address the adaptation and mitigation component of the NDC.

The revision process delivered a number of key lessons, one of which was that wide-ranging support and partnership – a long list of external groups including the Commonwealth Secretariat, United Nations’ bodies (UNEP, UNDP, FAO), and Common Market for Eastern and Southern Africa (COMESA) among others, provided help during the process – is crucial to achieving goals.

And it will only be with similarly broad co-operation with, and support from, international and domestic sources that Eswatini will be able to fully achieve the ambitious potential of its NDC.

The total estimated cost of NDC action for Eswatini is between $950 million and $1.5 billion by 2030.

Eswatini’s NDC process has shown that with partnership and help, ambitious plans can be laid.

The country calls on partners, fellow governments, and all those with a similar commitment to a zero-carbon, climate-resilient future, to help Eswatini turn its NDC plans into tangible achievements – for the good of the whole planet.

The CCFAH and the Commonwealth National Climate Finance Advisers supported these countries through different and complementary interventions, by developing and deploying different climate finance tools and strategies tailored to the strategic priorities of the member countries.

These interventions provided a vital experience for future NDC processes.